The display explores the history of Geoff’s shop in West Street, Midhurst, West Sussex, which has been a watchmaker’s shop since the 1700s.  It highlights some of the personal stories of the watchmakers who have lived and worked there through history, while commenting on a business still successful in times of change. 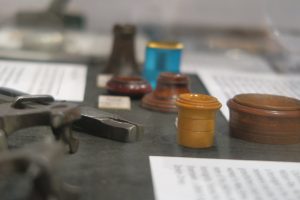 Clocks, watches and ephemera relating to the premises, now part of Geoff’s own collection , are on display along with some traditional tools and the work of recent and current apprentices Jacob and Paddy, who are training to be the watchmakers of the future.

The watch and clockmakers who worked in the building over time from the 1700s to today, range from determined women to the tragic son of a German immigrant and dynamic young horologists carving out a future today. Meet 18th Century William Roe, Mary Wrapson and  Mary Anne Lawrence in the 19th Century, Joseph Ketterer, The Bannister Family and John Allnutt in the 20th Century, all with a story to tell. 2019 is represented by Geoff Allnutt who specialises in watchmaking, our clockmaker and Queen Elizabeth Educational Trust alumni, Tim Hughes, former apprentice Jacob Russell and apprentice Paddy Woodward. The display showcases their fine work, treading in the footsteps of those past horologists to keep the skills alive for the future. 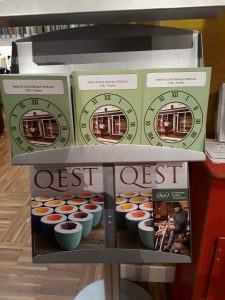 Their work is supported and inspired by organisations such as Queen Elizabeth Scholarship Trust, The Heritage Craft Association, The British Horological Institute, The Antiquarian Horological Society, The George Daniels Educational Trust and West Dean College of Art and Conservation. Find out more about the work these institutions do to preserve and promote crafts skills too, making parts and tools by hand in a very similar way to those who have gone before.

Although the display is small there is a lot to discover and pursue. It is situated in the social history gallery of The Novium Museum, where there are further fascinating local history displays.

You can visit the exhibition at the award winning museum in Tower Street, Chichester during the following opening times which vary depending on the season:

Built over the remains of a Roman bathhouse, the museum is FREE and accessible to everyone. It features varied displays over three floors, telling the fascinating story of the Chichester District and its rich heritage. It also includes a unique viewpoint of the Chichester Cathedral and Bell Tower from the upper gallery.

We are delighted that you have taken the time to view our unique antique clock & scientific instruments.

If you would like to discuss an item with one of our highly qualified and friendly staff please contact us
on +44 (0)1730 812786
or email us on info@geoffallnutt.com

or alternatively if you see anything in the SOLD section that catches your eye, please do not hesitate to ask if a similar item is available.