“When fixed it shall be a fine timekeeper” 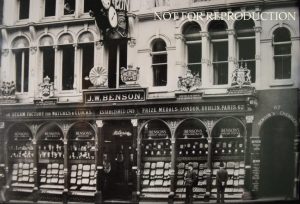 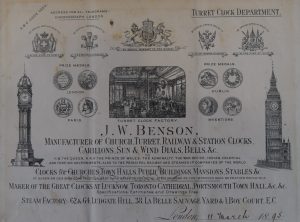 Recently we have been very fortunate to acquire this fantastic piece of historic ephemera after a chance conversation with one of our regular visitors.

Our chat had led to a discussion about one of John Allnutt’s early jobs being at the long standing firm of J W Benson (Ltd). They were a well regarded London watch/clockmakers (including Turret Clocks) trading between 1847 and 1973 (The family had been involved in clockmaking since mid 1700s) 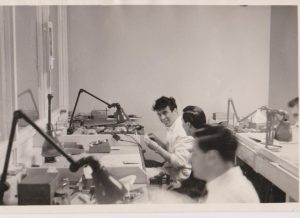 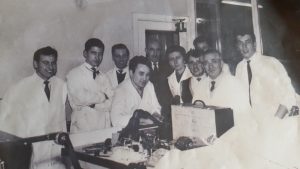 The following week, by coincidence, during a leisurely visit to a regular market, this estimate surfaced. We were all very excited at seeing it. Dated 11th March 1895, it is beautifully printed with the Benson company heading and written out painstakingly in neat inked handwriting.

The description tells us that the turret clock is quite a small one due to dial size and pendulum length and the bell is small, weighing only at ¾ cwt. Therefore it was likely to be located in a stable block. It is clear the estimate is for the overhaul of an existing clock rather than a new make. The frame is of flatbed construction and generally it is all fairly standard, despite the way the estimate has been a little embellished, which is probably to be expected.

These of course will be very familiar even today to our skilled turret clock professionals.

However for me such snippets of information as the polishing to be done by “steam machinery” are key. Joe Smith one of the family who run Smiths of Derby, turret clock specialists agrees, saying “ Benson insists on reminding the world it’s a *steam* factory. Just as J Smith and Sons in the same period included ‘Midland Steam Clockworks’ on its boilerplate. Space age! Suggests that the intimation of technological advancement and investment was deemed a competitive advantage.”

Also of particular interest is that the cost included the delivery of the 4ft diameter dials to London by “nearest railway” (as well as the accompanying man’s time and rail fare).  On reading this Andy Burdon of The Time Workshop in Horsham, commented that he recently saw the details of a clock “where the church wardens were paid to transport the clock from a barge to the church and they were paid in beer.  In fact the money never went to them, the landlady was paid direct for their beer”.

Talking to Keith Scobie Youngs of Cumbria Clocks, who are still making and overhauling turret clocks today there are a couple of interesting technical points.

The spindle is made of wrought iron rather than steel like the barrels, the pendulum is pine wood rather than red wood but otherwise all is very similar to work being done today. Repeating work was mentioned but this is most likely to highlight the fact it is rack striking.  Keith made some suggestions for further research that I am very grateful for.

Geoff liked the “transparency” of the warranty “We also undertake that during construction the clock shall be open to the inspection of the architect or anyone appointed, and that every facility shall be given him to overlook the work in our factory”.  Keith however was surprised the warranty only covered the clock for 12 months as now it would be more likely 10 years.

For all the work to the turret clock including frame, movement, pendulum, motionwork, dials and hands (but not carpenters and bricklayers) the cost was estimated at £70.00.

In 1895 this was very approximately equivalent to £89,400 today.  (Thanks to Andy Burdon for the calculation). According to Keith this does sound rather high, for a clock this size, the cost today would probably be half that. However the estimate seems competitive as another estimate for a similar clock from the Smith of Derby archive dating to the following year is costed at between £68.00 – £94.00 (The latter estimate is if quarter chimes are incorporated) (Is the Smiths construction better quality and so better value for money?)

We are currently trying to track down the building to which the estimate refers.  Again with the help of Andy Burdon, we have narrowed it down to a couple of options near Godalming in Surrey.  The estimate has also been added to the Antiquarian Horological Society Turret Clock Database so that it is available for researchers to access. Eventually, once the turret clock is (hopefully) identified, it will help add to our knowledge of turret clocks across the United Kingdom.

If anyone is interested in seeing the item, please do contact us at the telephone number supplied in the first instance.

We would like to thank David Higgins whose sharp eyes, interest and kind generosity have brought this fascinating piece to us. We will of course report more as soon as our research gets underway and we have further information.

I would also personally like to thank the writer of the estimate whose wonderfully neat handwriting has meant transcription was not as difficult as it might have been!